WHAT IS KIRTAN SHAKTI?

Kirtan Shakti is an album of inspirational music that will raise awareness and funds for underprivileged girls in India. Over the decades, I have enjoyed kirtan with family, friends, strangers (and even the occasional protesting neighbor!). I have spent years playing music with some amazing souls, many of whom have honored me by joining this project. However, until recently, I had resisted the urge to make a record. How could I bottle the energy swirling through the temple room? What could I record that would be different from the many great kirtan albums already out there? Most importantly&hellip; Why? Why take on the task of recording an album? I was looking for a broader purpose; something that kept going after the music stopped… something that made a difference. When my daughter was born, I found myself worrying about the kind of world she would eventually grow up in. And I found my motivation: create an album that showcases male and female voices working together, a musical allegory that celebrates the genders living in respectful harmony, an album that will create change by channeling the transformative power of kirtan:  Kirtan Shakti

Project supported by Kulimela Association. All donations to this verified 501c3 non-profit are tax deductible for U.S. residents. All profits from this album will go to charities that support women.

WHY ARE WE DOING THIS?

Food for Life Vrindavan is a humanitarian aid organization officially recognized by the government of India. For the last ten years, they have worked in the poorest villages in the area surrounding Vrindavan. Their services include:

–  Education for 1,500 children from kindergarten through inter-school. Their students are predominantly girls, though boys are allowed in kindergarten.  Without organizations like FFL Vrindavan, these girls would not get the same educational opportunities. In fact, girls not only get less education, they also get less food and less medical care than their male counterparts.

– Medical assistance to about 1,000 people per month.

– Assistance to the elderly and the disabled.

HOW CAN YOU HELP?

If everyone adds their spark, together we can start a fire!

What are Perks? We know how much it means to contribute financial support, and we want to show our gratitude by giving you something in return. Our perks are a way to bring you on our musical adventure, share an experience or memento along the way, and leave you with the satisfaction of making our socially conscious kirtan album.

BUT you do not have to select a Perk if you simply want to contribute! If the spirit moves you, you may chip in $1 or $1,000 (or $5,000!). You can also select any particular Perk and choose how much you’d like to donate for it (as long as it is above the listed Perk minimum). Any donation over $20 will be eligible for a digital download of the album.

All contributions to this 501c3 nonprofit will be tax deductible for U.S. residents.

Reaching this goal in such a short period has allowed us to re-think the scale of our dream. When we set out on this journey we envisioned making a responsible album, something adequately recorded and mastered that we could be proud of. Now with the overwhelming tidal wave of support crashing over us, we are setting our sites on a stretch goal that would enable us to make the album of our dreams.

For the remaining weeks of the campaign we will continue our fundraising with the hopes of reaching our new stretch goal of $16,000. Every dollar of the additional funds will go towards broadening the appeal of this album so that it generates the maximum amount of funding for our beloved charity. Specifically, we would like to:

Right now Kirtan Shakti is the second highest funded kirtan album on Indiegogo. We are quietly hoping in the coming two weeks we can make it to Number 1 so this album can exceed your wildest expectations.

Thank you from the bottom of our hearts. You. Made. This. Happen.

Love and gratitude from the Kirtan Shakti Team,

The Singers – Kirtan in the Genes

Every one of our singers has been enjoying the spiritual
music of kirtan since childhood.

Where Your Money is Going

The money we raise will be put towards the hard costs, which include but
are not limited to: 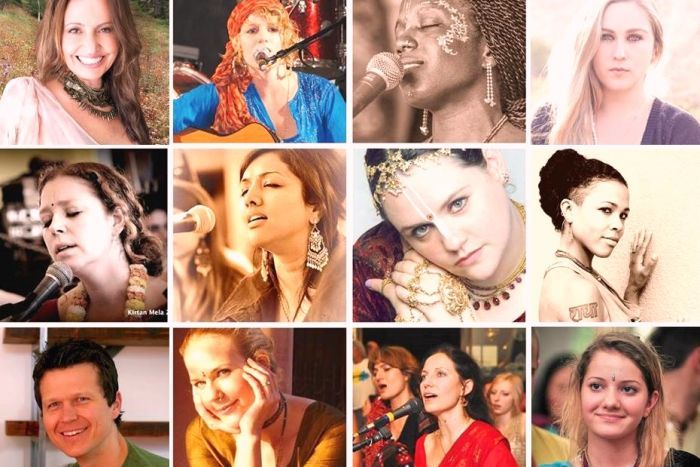 Right now we are raising funds to produce and promote the album. Then, once the album is released, 100% of the profits from the album will go to the charity. Initially the charity we are working with is FFLV, but we are open to adding other worthy causes down the road, should the album have a long and prosperous life. Within FFLV, specifically we will be requesting the funds go to help the girls’ school where they provide food, uniforms, and medical assistence on top of their education. Also, some organizations have salary costs built in even though they are non-profits. This project will have no such costs. All the singers and myself will be working for free.

We are starting this project by raising $12,400, as this is the bare minimum we will need to record a professional quality album, mix, master, print CDs, fulfill rewards and cover the associated crowdfunding fees. However, if we reach our goal early, I have some exciting stretch goals planned with super-awesome-top-secret surprise perks up my sleeve.

Having grown up in a third world country where every accomplishment came after enormous struggle and unexpected obstacles, I have learned to adjust to whatever roadblocks come my way. Every project has challenges, but with planning and flexibility, I am confident that these can be managed. My creative experience ranges from launching a quarterly magazine and running a kirtan tour for teenagers, to putting myself through university, producing devotional theatrical works, and secular film and television series (in the US). I am aware that coordinating a group of musicians from around the globe will be challenging, but I am confident in my experience and abilities and am excited to meet the task. If you have questions or concerns, please feel free to reach out: madi.brinkmann@gmail.com

Madi is a California dad who grew up in India. Born to Bhakti Yogi parents, he spent his formative years living in a boarding school ashram (gurukula) in Vrindavan 100 miles south of New Delhi. Mornings began at 3:30am, where the students attended the mangal arati kirtan in the temple room. It would be the first of several daily worships. Needless to say, he was surrounded by the music of kirtan and has been singing and playing drum ever since.

When Madi moved back to America (with a thick Indian accent!), he studied film at USC and went on to work on movies and television in the entertainment industry. Though the years brought many changes, Madi maintained his musical kirtan roots. And though he no longer wakes up at 3:30am (unless the baby cries), he still does kirtan at the temple every Tuesday  night. Over the years, he has collaborated with many of the well-known and yet-to be discovered artists from the growing community of kirtan music.

Having completed her Ph.D in Developmental Psychology, Subhadra is now Assistant Professor in the UCLA Pediatric Pain Program, where she runs the Yoga Research Program. At home, when she’s not caring for her two delightfully mischievous children, she collaborates on creative projects with husband, Madi.

Yamal grew up on the mean streets of New Dwaraka, where he attended gurukul, studied film at UCLA and pursued work in the entertainment industry. An avid artist, poet and horse-whisperer, he and Madi have worked together on many projects, both musical and motion picture. Though he lives in the foothills of Santa Cruz, whenever Yams ventures south, he brings gifts for his goddaughter Kaia, makes ice-cream fudge pies for Bodhi, and whips Madi back on point when the latter wanders off on creative tangents.

Evan Clayton Horback (Srinivasa dasa) has been a student & practitioner of the Bhakti Yoga tradition since 1995 and has studied in several ashrams in both India & the NYC area. He has degrees in Visual Arts & Art Education. as well as a graduate degree in Educational Leadership. Over the last ten years, he has taught in public & private schools & is currently working as a studio artist.  Evan lives with his wife, Sachi, & two daughters, Varshana & Amala, in Olympia, Washington.  You can see his current work here.