Come to sing with Jaya Deva!
We will celebrate Shiva! Chanting different Kirtans, Stotrams of Shiva!
We will also chant the Shri Rudrashtakam that KD told me to chant once!
Also we will share some interesting stories between the kirtans related with the event.
Date: Saturday 23rd July
Time: 19:00 – 21:00
Location:
OOST THRIVE YOGA
Tweede Atjehstraat 55, Amsterdam
https://thriveyoga.nl/
info@thriveyoga.nl
Infos: +31 6 18030909
Investment:
15€
Event in Facebook:
https://www.facebook.com/events/455442023084978
ABOUT CHANTING
When we chant we go deeper into ourselves, to our presence, to the now, to the awareness.
We let ourselves to flow in the waves and vibrations of the mantras, and we go deeper and deeper.
When we chant, our feeling, our state of being changes, and thoughts and tendencies calm down.
And we experience the gunas, the three states, tamas, rajas, and finally we settle in sattva guna, a beautiful luminous state of being.
ABOUT JAYA DEVA
Jaya Deva has been immersed in the Bhakti tradition since born, he was initiated into chanting in ashrams and in the Siddha Yoga tradition since child.
Later on, he started playing harmonium in the Sangha of Swami Satyananda Saraswati.
In 2010 meet Krishna Das and his life changes in a radical way, left aside the path of Jnana Yoga and focused only in Bhakti Yoga and chanting. He learns
the Hanuman Chalisa with Krishna Das and deeps the practice of harmonium in the tradition of Krishna Das.
In 2014 after a 6 months travel to India, finally takes the name of Jaya Deva while he is in Kainchi Ashram of Neem Karoli Baba.
From 2014 leads monthly kirtans in Barcelona, he chants to the main Hindu deities or devatas, with special focus to Shiva, Hanuman, Kali and Durga.
Also he has played in different European cities like Helsinki, Copenhagen, Malmö, Stockholm, and London and also in some local Festivals.
He has played in different temples and ashrams in India, in Bombay, Ganeshpuri, Rishikesh, Varanasi, Tiruvannamalai and as well in Bali, Singapore and Dubai.
His kirtan style is a classic chant and response kirtan, very influenced by Krishna Das kirtans in voice and melodies, his kirtans tend to be ecstatic and the experience is meditative and a yogic sadhana.
// OM NAMAH SHIVAYA GURAVE
SATCHITANANDA MURTAYE
NISHPRAPANCHAYA SHANTAYA
NIRALAMBAYA TEJASE // 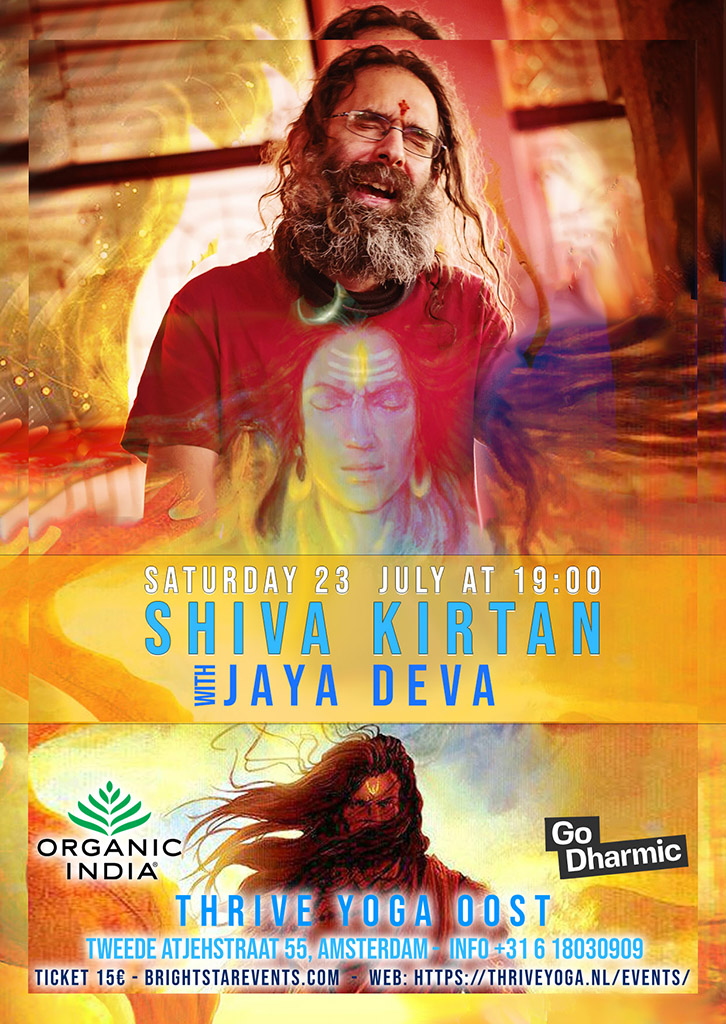