Friends, our Centennial Concert Series has been an incredible success and celebration, thanks to all of you! We are so excited to announce our November performance, which we know will bring us all some joy.

This is a recorded performance of Maestro Ali Akbar Khan and Pandit Swapan Chaudhuri, which took place in the well-loved Julia Morgan Theater in Berkeley, CA. Julia Morgan was home to many concerts in the AACM’s history, and was a place that many of our older students and friends will remember fondly. We thought there was no better way to celebrate the immense life and work of Khansahib, than to feature his music itself.

The 1987 performance between Khansahib and Swapanji was a rare morning concert, beginning with raag Basant Mukhari, and finishing with raag Bhairavi Bhatiyar.

We hope that you’ll join us in reliving this moving piece of our community’s history, and enjoying a spectacular morning of music!

These performances are offered courtesy of Sound Photosynthesis and Alam Madina Music Productions, and are hosted by Khansahib’s school, the Ali Akbar College of Music—a non-profit organization seeking to spread the teachings of this ancient tradition to any and all who wish to learn. For more information about upcoming events throughout this Centennial year, please visit aliakbarkhan.com. 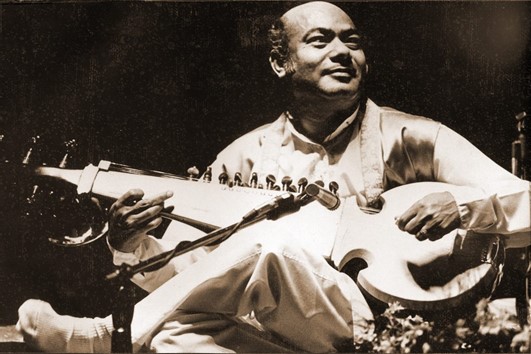 Maestro Ali Akbar Khan (known more familiarly as Khansahib) was regarded as a “musician’s musician.” He was the master of the sarod (a 25-stringed, fretless instrument), in the Maihar gharana (ancestral tradition), and was known for his incredible breadth of artistry and knowledge. He was born in the village of Shibpur, in present-day Bangladesh on April 14th, 1922, and was raised by his father, Acharya Baba Allauddin Khan, and his mother, Madina Begum. 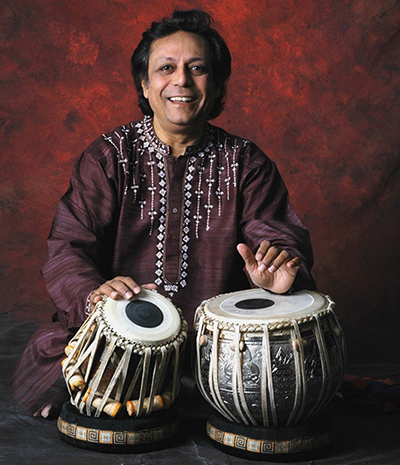 Pandit Swapan Chaudhuri is a phenomenon in the arena of Indian Classical Music. Musicians honor him as one of the most respected Tabla players, worthy of highest regard all over the world. Today a two-time Grammy nominee, it was Swapan’s beloved parents, through their own passion for music, who initiated his formal musical training and inspired him in the field of Tabla, paving the path that would eventually lead him to virtuosity.

Swapanji holds a pedigree of awards and accolades reserved for artists of only the highest caliber. He is a recipient of the prestigious Padma Shree Award and Sangeet Natak Academy Award from the Government of India, as well as the American Academy of Artists Award—accolades which are reserved only for those artists who have attained the highest level of artistry. He is also the recent recipient of a Doctorate of Letters from Rabindra Bharathi University in Kolkata, India. Swapanji has received the Excellence in Performing Arts Award from the Global Indian Congress in San Francisco, and has been nominated into the esteemed International Percussive Arts Society’s Hall of Fame. In 2016, and again in 2019, Swapanji was awarded the Master/Apprentice Award from the Alliance for California Traditional Arts.

Swapan Chaudhuri started learning Tabla at the age of five. He bases his style on the intensive training he received from his Guru, the late Pandit Santosh Krishna Biswas of Kolkata—an eminent exponent of the Lucknow Gharana. He holds a Master’s Degree in Music and has been conferred honors for his distinguished contributions in the field of Tabla by various academic and musical institutions. In addition to academic degrees in music, Swapanji also holds a Master’s Degree in Economics from Jadavpur University, Kolkata.

Pandit Swapan Chaudhuri’s music is the spontaneous expression of his powerful emotions and his deep knowledge of Tabla. His ingenuity has ushered in a purely new style of Tabla playing. It is undoubtedly through his clarity and elegance of performance, both as an accompanist and as a soloist, that he has achieved such notoriety throughout the world as a true master of Tabla.

During Ali Akbar Khan’s career, he often dreamed of being able to open a school of music; an institution where musicians and music lovers alike could exist together and be surrounded constantly by their shared interests. After opening his first school in Calcutta in 1956, Khansahib
was drawn to California and the incredible interest he found when visiting the Bay Area. It was his father, the esteemed Acharya Baba Allauddin Khan, who instilled in Khansahib the importance of spreading and teaching this music to any and all who wish to learn. His influence
was the basis for Khansahib’s vision and remains as the mission statement of the AACM.